Posted on October 10, 2015 by wakingofthebear

When I was a kid in elementary school, I was required to memorize a poem about Christopher Columbus. I’m sure a lot of you learned the same poem. In case you have forgotten, it starts like this:

He had three ships and left from Spain;
He sailed through sunshine, wind, and rain.

The poem goes on to describe the hardships and triumphs of the voyage, and ends with a couplet I had forgotten:

The first American? No, not quite.
But Columbus was brave, and he was bright.

For years I believed that Christopher Columbus discovered America. The truth, however, is that Columbus never even set foot on the North American continent. He actually landed first in the Bahamas, and on subsequent journeys landed on various other islands of the Caribbean, and finally landed on the South American Continent.

There is proof that the first European to come to the North American Continent was a Viking named Leif Erikson. It is believed that he landed on the continent 500 years before Columbus missed it. By the way, did you know that there is actually a Leif Erikson day that is proclaimed by the President each year on October 9?  Me neither.

My dictionary defines discover as 1: to make known or visible 2: to obtain sight or knowledge of for the first time. Since Lief was here earlier, millions of indigenous people had already been here for more than 10,000 years, and Christopher Columbus was never here, it is probably not accurate to say Christopher Columbus “discovered” America.

What is accurate to say, is that Christopher Columbus introduced slave trade between the New World and Europe, killed thousands of indigenous people, and allowed his men to rape and plunder freely. And for that, we honor him each year with a federal holiday, and teach our children about an event that never happened. 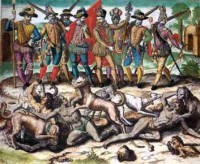 The federal holiday in question was established by President Franklin Roosevelt in 1934, after intense lobbying of the Knights of Columbus, a Catholic fraternal organization, and New York City Italian leader Generoso Pope. Anyone else see the connection here? I’ll give you a hint – Columbus was an Italian Catholic. Yes, he was working for the Spanish King and Queen, but he was born Italian.

What is wrong with us?