Posted on April 9, 2015 by wakingofthebear

For some reason, ABC has chosen to broadcast The Ten Commandments on Easter Sunday  every year since 1973. I will admit that the epic movie directed by the legendary Cecil B. DeMille was and is a spectacular cinematic event. It stars Charlton Heston, Anne Baxter, Edward G. Robinson, Yul Brynner, and a host of other notable actors and actresses. The special effects were amazing for a film made in 1956, and still seem pretty darn neat.

The question I have about this annual broadcast is, what does this have to do with Easter? The story is about Passover and the Exodus, which are Jewish events. Admittedly, the Easter event is set in conjunction with Passover, but the giving and receiving of the Ten Commandments supposedly occurred several months after the initial Exodus commenced. That would make it well after Passover.

I would also point out that Judaism and Christianity do not own the call to proper behavior described in these commandments. Commandments and precepts from many religions share many of the same suggestions for behavior. One of the Pagan “commandments” states that one should “Honor our elders for they have much knowledge.” Good suggestion, especially since I am an elder.

Buddhism has a set of precepts that include “abstain from killing, abstain from taking what is not given, abstain from false speech, and avoid sensual misconduct.” Sound familiar?

The Hindus have a list of ten disciplines that include “truth, no desire to possess or steal, non-violence, and non-adultery.” This is becoming quite repetitive.

Even Muslims have a set of commandments. Theirs are a little more threatening than others, such as, “As to the thief, let their hands be cut off.” That’ll teach ’em. Youch!

Interestingly enough, Jesus, who was quite the zealot, and is the central figure in the Easter story, basically said there were only two commandments that mattered – love God and love your neighbor. I bet that got a rise out of the Jewish leadership.

So, even though these directives against stealing, killing, dishonoring your parents, adultery, lying, and coveting may lead a person to live a better life, and are obviously universally accepted by most major religions, I still ask the question, “What does this have to do with Easter?” 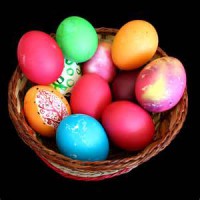 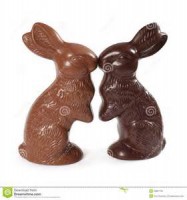 I guess next to colored eggs and chocolate bunnies, it has just about as much relevance.

4 Responses to The Ten Commandments