The Right To Bear (Bare) Arms

Posted on April 5, 2015 by wakingofthebear

In 1791 the first ten amendments to the Constitution of the United States, known as the Bill of Rights was adopted. There were several versions of the second amendment, but the version that was finally adopted said, “A well regulated militia being necessary to the security of a free State, the right of the people to keep and bear arms shall not be infringed.”

If we look at this in the context of events of the day, we will realize that those rights had, in fact, been infringed by the previous governing entity – England. It is not remarkable that this was considered the second most important right, following closely behind the right that included talking about it.

It also may be of interest to consider the “arms” to which this right referred. Fire arms in 1791 would be made by a gunsmith, have rudimentary rifling, be single shot weapons, be loaded through the muzzle, and fire by means of a flintlock. A far cry from an AK-47.

If you are getting the impression this post is about abolishing the right to bear arms, you are mistaken. The fact is my wife and I both own hand guns and are licensed in the State of Texas to carry those weapons in a concealed fashion. As a young lad (junior high school age) I owned a 410 shotgun, and shot jackrabbits.

All fifty states have some variation of a concealed handgun carry law. As would be expected, there is a uniqueness in each state, but most include some sort of background check and training. 11 states permit open carry, and 13 other states permit open carry with certain restrictions. Which brings me to the actual concern I have about the right to “bare” arms.

It may surprise you, as it does me, to know that Texas has yet to pass a law allowing persons to carry handguns openly. Be not dismayed, there is a bill being bounced around in Austin that would put us in the category of “open carry,” when it passes. Knowing our legislative record, that could take a while.

Oklahoma has an open carry law, and I was subjected to the reality of that law at an art show there last year. A young man, who from all appearances was a person I would not even trust to carry my groceries to my car, was “packin’ heat” on his hip. I tell you folks, it was scary. You know the guy. (I think his gun belt was the only thing holding up his pants.) 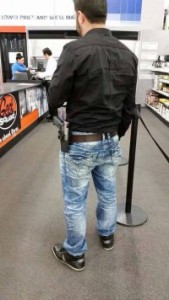 Even criminals, as stupid as they are, are smart enough not to carry their weapons where anyone can spot them.

My first opinion about open carry is that anyone who thinks it looks tough and/or cool to strap a handgun to their hip and walk around in public, should not even be allowed to carry a handgun at all. Secondly, even if Texas passes the law allowing me to carry my handgun in plain sight in public, I will respectfully decline.

What is my reason? If I am in a public location, with my gun strapped to my hip, and some deranged individual has a notion to use a weapon with criminal intent, who is the first person he/she is going to shoot? Answer:ME! Because I am an immediate threat to him/her.

I just don’t want to die that way.

12 Responses to The Right To Bear (Bare) Arms