Orgone or Not Gone

Posted on October 28, 2014 by wakingofthebear

A little over a year ago my wife purchased an OPEG for me. What is an OPEG you ask. That is an acronym for Orgone Positive Energy Generator. Mine is small enough to carry in my pocket, which I have done since the day she gave it to me. OK, so you probably need more explanation about OPEG.

First of all, these can be purchased from a company named Bittle Box Art. They have an Etsy site that is listed in the column to the right under the heading, “People I Believe In.” My OPEG contains a Tibetan Crystal, Rhodizite Crystals, Peridot, Black Tourmaline, Shungite, and Copper Nuggets. 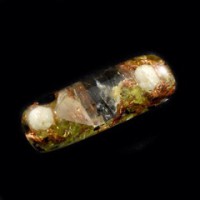 The Tibetan Crystals are hand mined in the Himalayan Mountains of Tibet, and hold some of the sacred energy of the area. Rhodizite Crystals are found in Madagascar, and are called the “master crystal,” because of their amplification properties. Peridot is known as a visionary stone that brings understanding of destiny and purpose. The Black Tourmaline repels and protects against negativity of all kinds. Shungite is a mineral from Russia that has amazing healing qualities and is known as the best grounding mineral on this planet. The Copper is added as an excellent conductor of metaphysical energies.

By now, some of you are probably shaking your head and saying, “Troy has finally gone over the edge. He has lost all touch with reality and fallen deep into the woo-woo hole.” I don’t blame you for your concern, but let me tell you a story about my OPEG that may ease your mind a bit, if not totally blow it away.

As I said before, I have carried my OPEG with me every day for over a year, and even though I can’t tell you that I have physically felt its power, I have felt comfortable with it in my pocket. In fact, I will reach in my pocket and touch it several times during the course of a day.

This last weekend I was at an art festival in Richardson, which is about an hour’s drive from our place. Typically, I will stop at a Starbucks along the way and get a coffee drink for the road. I get the same Starbucks drink almost every day. It is a ritual for me.

During the day on Saturday, I felt in my pocket, and discovered that my OPEG was missing. Since I was carrying my truck keys in the same pocket, I deducted that it must have fallen out at some point when I took out my keys. So I searched the area, and the parking lot, but found nothing. I decided that perhaps I had not put it in my pocket that morning, and it may still be in my closet at home. No it wasn’t. I resigned myself to the fact that I had lost it for good.

Now comes the fun  part. On my way to the festival on Sunday morning, I had to stop for gasoline at the Tom Thumb down the street. Inside the Tom Thumb store is a Starbucks kiosk. I thought about getting my coffee drink there and avoiding another stop, but for some reason decided to go on to the regular Starbucks. When I arrived at the Starbucks, I thought about parking in front instead of on the side, where I had to walk some distance around to the front, but for some reason I decided to park on the side as I usually do.

Are you ready for this? When I got out of my truck, I happened to glance down, and there on the ground, in the parking lot,right beside my truck was my OPEG. It had been there for 24 hours. There were two very distinct decisions I made that put me in that exact place. If I had gotten my Starbucks at Tom Thumb, or if I had parked in front of the Starbucks, I would not have found it. Was it drawing me to that location?

Draw your own conclusions. I have. One thing for sure, I have confirmed once again that Starbucks is indeed a sacred place.

2 Responses to Orgone or Not Gone