The Dogs of Our Lives or How the Tail Wags

Posted on August 15, 2014 by wakingofthebear

Once again, my muse/wife came to my rescue. I was fretting about my next post, since last week I had to dig into previously written material in order to keep my readers satisfied. (At least I hope you are satisfied). Regina had been watching one of our dogs, Gabby, doing something goofy, which she does very well (Gabby, that is). She suggested a post about Gabby, but as usual, my mind cogitated on that idea, and expanded it to include several of our canine acquaintances.

During the 27 plus years of our marriage, we have had the privilege of being friends and caretakers of 10 different dogs. And when I say different, I mean DIFFERENT. Most we rescued, but some we actually purchased, and two just showed up on our property. One actually came as a part of the “marriage agreement,” but I refuse to dwell on Pebbles the Pomeranian. As a side note: At one point we had 5 dogs and 6 cats living in our house simultaneously. That was a zoo.

We had gone to a home and garden show in Dallas to get some ideas for an old house we were remodeling. There she was. We were actually leaving the show without her, but we couldn’t get those eyes and that smile out of our minds. We went back, and took her home. Little did we know at the time how absolutely, certifiably crazy she was until a friend came to our house. Polly went ballistic. She would not stop barking and being downright scary. That continued to be a pattern. Her back story was that she was abandoned in an apartment during the summer, without food, water, or air-conditioning. That would make anybody crazy. Unfortunately, most people saw her as a vicious dog, whereas we knew her to be very loving and lovable. We called her “Mommy Polly” because of her mothering attitude toward every young dog we brought into her life.

As you may have guessed, this dog was purchased at a horse show in Tulsa, Oklahoma. We are very creative with names. She was a Blue Heeler, and was highly intelligent, stubborn, and tough. She once got kicked in the mouth by a horse she was heeling. We didn’t know it had happened until we saw blood on the barn floor. She used to travel with us to horse shows, and was a wonderful companion. Unfortunately, when she got old enough to want to be alpha dog, Polly took great offense to the challenge. I imagine the conversation went something like this: Tulsa said, “I ain’t takin’ orders from you any more.” To which Polly responded, “Then I guess I’ll just have to kill you.” We actually believed that one of them would end up dead or severely wounded. Tulsa had to go live with another family. We feel the loss to this day. 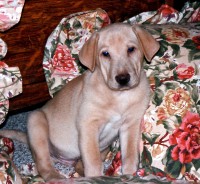 I wept alligator tears when Butch had to leave us. Again, a home show resulted in a new addition to our family. He was in a mixed litter, but obviously had a lot of  Yellow Lab connection, except for the fact that he didn’t like water. The rescue folks had named him “Silky.” That name changed immediately. Even as a small pup, he was a crotchety old man, and remained so. He really wanted to be a lap dog, but nobody in our house had a lap large enough. Any time the camera came out, Butch was ready. He was very photogenic. We have more photos of him than any other dog. Plus, he looked so good in his dress up stuff.

65% Wolf, 35% Husky. Agressive? Not in the least. Shy? Yes. One of the most beautiful and sweetest canines we have ever had. WE were standing in line behind a couple at the pet store. They had a wolf-mix puppy. When they told us where they got him, we were on our way to Richardson to pick her up that very afternoon. She gives us a whole new perspective on what Wolves are really like. She is more than willing to yield the place of alpha dog to her much smaller companion. Does she love the snow? Like a small child. One storm that came our way this last winter dumped a big layer of ice that resembled snow. When Mimi (her nickname) went outside to play, she was totally non-plussed, and even a bit depressed.

A friend posted a photo of a Basset Hound who had been picked up off the street in Lancaster – about 50 miles from our place. I had owned Basset Hounds previously, and before I could make an intelligent decision, we were on our way to pick up our latest addition. We had talked about how Mimi would need a companion after Butch was gone, so here was the solution. On the drive, I picked a name, literally from the sky. “The Angel Gabriel, ” I said, and the name stuck. However, because of her noise level, the name was quickly reduced to Gabby. She barks, snores, talks back, moans, and whines. She is Gabby, and she is the alpha dog.

In the interest of brevity, I have only talked about half of our canine friends, but rest assured, each one had its own wonderful personality, and was dearly loved. The others’ names were Pebbles (a Pomeranian), Pookey (a Shelty), Kinney (a mixed breed we picked up at the horse show in McKinney), Sam (a German Shepherd), and Buddy (Sam’s friend that showed up with him on our property).

Life without dogs must be extremely boring.