Posted on April 6, 2014 by wakingofthebear

Last week we lost one of our animals to a tragic death. With over 40 animals in our care (a lot of them older animals) we know that animal deaths are inevitable. The life span of most animals is not very long, and as with humans, the older they get, the more things start to go wrong with their bodies.

The two biggest problems with horses (we currently have 4) are colic and foundering. Colic is usually treatable, if it is caught before it progresses too far, but foundering is very difficult, if not impossible to treat. Foundering, also referred to as laminitis, is a breakdown of the structural tissue of the hoof. It can be caused by many different situations, and most veterinarians will just say, “I don’t know.” Valentine, the mare I used to ride and show developed laminitis several years ago and was in excruciating pain. My biggest regret is that I did not have her put down sooner. It was one of the most difficult decisions I have ever had to make. 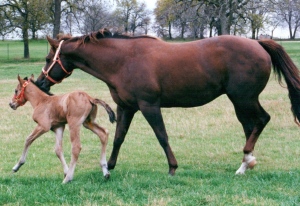 This is Valentine with her new baby Scout.

We have had several dogs and cats that had to be euthanized for various reasons, most related to old age and quality of life. Probably the hardest for me was Butch. He had such a wonderful personality, but in the end he could not even stand up or walk. He had no quality of life. There were a couple of dogs that had to be put down due to aggressive vicious behavior toward other dogs. One of our cats, Katie Scarlet, was in so much pain that she would literally scream.

Butch loved to dress up and have his photo taken. 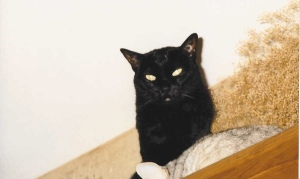 We do not make any of these decisions without careful consideration. Regina is very good at communicating with the animals, and knowing when it is time.

There have also been some rare and bizarre deaths. One alpaca, Blackie, died from anaphylactic shock after receiving an injection of the wrong vaccine from a veterinarian. Needless to say, that vet is no longer treating our animals. We had a very old miniature horse,Chez, just drop dead in our pasture. We think he may have suffered a heart attack, but we don’t really know.

Blackie in the snow. 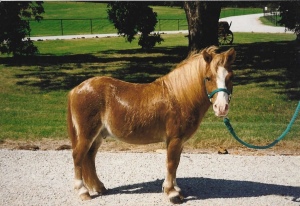 Chez after a cooling bath on a hot summer day.

But this death last week was probably the most gruesome of all. His name was Jesse James. He was a pygmy goat that we acquired from a friend. This friend had bought two pygmy goats for his grand children to play with, but one of them – Billy the Kid – was killed by coyotes. He knew that we had goats, and asked if we would take Jesse, so he would have companions. That was five years ago, and we grew to love that sweet little guy. Ironically, Jesses was killed by coyotes on Tuesday night. I don’t know when I have been hurt so deeply.

I guess what I am trying to say is that some of the deaths of our animals have a reason, and some don’t. They are all difficult to handle emotionally, but the useless deaths carry a strong sense of anger along with regret and loss. We  honor all of our animals that have died by placing their photo on an altar in our house. They are all cremated  and their ashes are spread under the big 300 hundred year old pecan tree on our property. On the trunk of that tree are small name plates for each of them. Encircling the tree is an eleven cycle labyrinth, patterned after the one found in Chartes Cathedral in France. We consider the pecan tree to be a very spiritual place.

The pecan tree where animal ashes are spread.

So, rest in peace Jesse James. You will be missed and honored like all who have gone before. Thank you for bringing pleasure to our lives.

4 Responses to When Animals Die