Posted on November 29, 2013 by wakingofthebear

You may have noticed that I didn’t make the title of this blog “Religion vs Spirituality.”  The simple reason is that I don’t believe they are in competition with each other.  I just believe they are two very distinct and separate concepts.  Unfortunately, many people think they are the same thing, so I feel the need to put in my two cents worth.

Am I actually qualified to talk about religion?  Well, let me start from the beginning of my experience.  When I was four years old, my father decided that God wanted him to be a preacher.  Not just any preacher, but a Baptist preacher.  At the time I had no idea what that meant, or what impact this decision would have on my life – I as only four.  My mother resisted.  Before his decision, he was an up-and-coming hospital manager.  He had been the manager of St. Mary’s Hospital in Lubbock, Texas, and somehow became the administrator of Baylor Hospital in Dallas, Texas.  I’m guessing this was a colossal leap, with a bright future.  My mother still resisted. In fact, I think she resisted until he finally retired.  She never liked being the “preacher’s wife.”

Yes, that is my father, but long before he became a Baptist preacher.  At this time in his life he was probably a bit of a hell raiser.  He was a member of the Cowboy Band at Simmons University in Abilene, Texas.

Being a preacher’s kid came with some responsibilities as well.  Namely, that I was expected to be in the church every time the doors were open, and if you know anything about Baptist churches, you know that included Sunday morning, Sunday night, Wednesday night and every night during a revival meeting.  Not to mention Vacation Bible School.  But there was also the need to live up to the reputation that preacher’s kids were the worst kids in town.  I did what I could to uphold that tradition.

So, yes, I think I am qualified.  At the time when I was growing up, and even into adulthood, I thought that religion (in the Baptist tradition) was just the way it was.  You get “saved”, you attend church regularly, you believe all the doctrine, and you will eventually go to heaven. 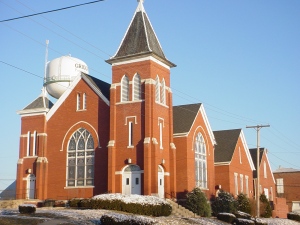 Needless to say, my views have changed over the years. I now understand that religions are human creations.  They have structure, hierarchy, doctrines/dogmas, and in most cases they have buildings. They are based on the use of fear to control the behavior of their members.  (If you don’t do as I say, you will surely go to Hell.) Obviously the religion that I am most familiar with is Christianity.  But I believe that all religions have an inventor and the subsequent disciple-enforcers that have created and interpreted the doctrines that are to be followed.

Now what about spirituality?  Well, in the first place, spirituality is not an invention, it just is. It has no man-made doctrines, no structure, no hierarchy, and there is no building. My belief in a nutshell is that we are not physical beings on a spiritual journey, but are spiritual beings existing in a physical body and environment.  Our spirit/soul is who we really are.  We are not our physical bodies, we are much more than that.

So, spirituality is that existence that helps us identify who we really are, and what is our real purpose. Spirituality is the guide to how we are to live and “behave” in our environment – how we treat ourselves and others.  It is personal and specific to each individual.  It answers to no one but ourselves. It is very different from Religion. I read a statement recently that said, “Religion needs spirituality, but spirituality does not need religion.”  I wish I had said that.

4 Responses to Religion and Spirituality